Get up to date on Arsenal transfer news, injury updates, fixtures, not restricting reports on Arsenal Ladies and share your thought on Goonerhead

Manchester United face a bit of crisis ahead of their clash with Arsenal due to injuries and suspensions.

Alexis Sanchez and Victor Lindelof will be out for some time with thigh problems, while Chris Smalling and Eric Bailly are injury doubts for the game after missing the trip to Southampton.

Romelu Lukaku and Luke Shaw remain doubtful as well after the duo was withdrawn early due to injuries at Southampton. Marcus Rashford was also forced off the pitch on Saturday due to injury but he should recover in time to face the Gunners.

Antonio Valencia and Matteo Darmian have knocks, while Ashley Young is suspended after picking up his fifth yellow card.

De Gea has to be at his best to stop Arsenal from scoring on Wednesday.

Made his Premier League debut at Southampton after coming on as a substitute but the game against Arsenal will be Dalot’s baptism of fire.

McTominay put in a decent shift in central defence against Southampton and could again be a part of United’s patched-up defence on Wednesday.

Jones will have a mighty task cut out against Arsenal’s nippy forwards at Old Trafford. A big performance is indeed required from the Englishman.

Matic has been poor all season long in his usual position. It remains to be seen how he handles the likes of Aubameyang and Lacazette on Wednesday.

There is every possibility that Rojo could play his first game of the season, against the Gunners. He could find himself at left wing-back position.

Fellaini’s involvement in the game would be vital as Jose will likely use him in a deeper midfield role to disrupt the visitors’ attacks.

His leadership qualities and tigerish attitude in the midfield will be needed for such a massive midweek game at Old Trafford.

Pogba had an awful day at Southampton and he’ll look to redeem himself against Arsenal in the midweek.

After a couple of quiet performances, Martial will look to put in a big show against an in-form Arsenal side.

Should recover in time to face the Gunners. Rashford’s pace and directness could give the Arsenal defenders a tough time. 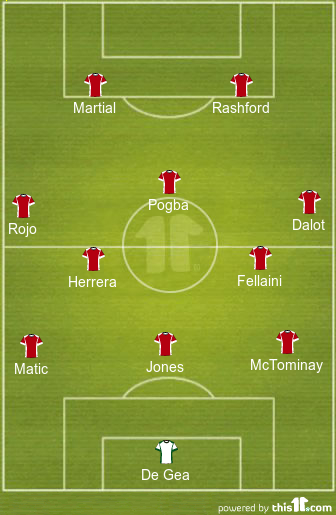 Welcome to the Emirates! Rodriguez agree personal terms with Arsenal

Henrikh Mkhitaryan To Become A Gunner?