Claims in the Spanish media on Denis Suarez to Arsenal are becoming fewer and smaller in content.

At one stage the deal was presented as almost done, with Arsenal managing to get Barcelona to agree to a deal on their terms. It would have seen Suarez move on loan for the rest of the season, for a fee in the region of €2m, with the Gunners having an option to sign him permanently in the summer.

Getting to that stage was something of a success. Barca had initially wanted a permanent straight transfer for a fee around €15-20, when it became clear the Premier League club couldn’t do that, the next step was a loan with a redemption obligation.

That was a no-no for Arsenal too, hence it ending up as a loan with option.

However, to do that, Barca required Suarez to extend his contract so his value would be protected if the option wasn’t used. He was offered a ‘modest’ pay rise but knocked it 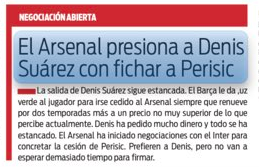 back, with Catalan newspaper Sport saying he’s asked for ‘a lot of money’ to renew, so everything has ‘stalled’.

Sport believe Arsenal are moving on to other targets, hence the Ivan Perisic rumours.

Shock in the Emirates as Arsenal confirm exit of attacker

Shock in the Emirates as Mesut Ozil confirms Arsenal departure