Fanatik claim Besiktas have switched their attention to Arsenal goalkeeper David Ospina, following reports their current No.1 Fabri is closing in on a move to Fulham.

The Turkish newspaper report Besiktas are continuing talks with Fulham regarding Fabri, and it seems at this stage the Spaniard will be moving to Craven Cottage.

According to Fanatik, Besiktas will target Arsenal’s Ospina if Fabri leaves and they are following his situation with the Gunners closely.

It’s claimed Besiktas will open talks with Arsenal regarding Ospina should Fabri go, and the Turkish club’s manager Senol Gunes has also given his green light to sign the Colombia international.

Yesterday we covered reports from the Turkish media that Fulham are moving in on a deal for Fabri after being linked with the Spaniard in the past week. 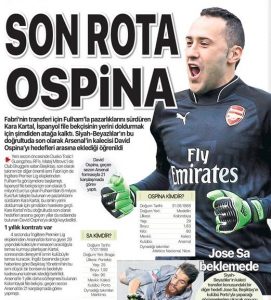 Fulham have reportedly offered €6m for Fabri and some in the Turkish media believe it’s looking likely Besiktas will accept this bid.

Fabri is contracted to the Turkish club until June 2019.